Pie in the Sky by Remy Lai 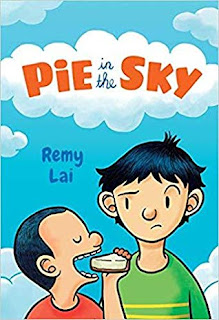 
Goodreads Summary
When eleven-year-old Jingwen moves to a new country, he feels like he’s landed on Mars. School is torture, making friends is impossible since he doesn’t speak English, and he's often stuck looking after his (extremely irritating) little brother, Yanghao.
To distract himself from the loneliness, Jingwen daydreams about making all the cakes on the menu of Pie in the Sky, the bakery his father had planned to open before he unexpectedly passed away. The only problem is his mother has laid down one major rule: the brothers are not to use the oven while she's at work. As Jingwen and Yanghao bake elaborate cakes, they'll have to cook up elaborate excuses to keep the cake making a secret from Mama.
Told in prose and graphic novel elements, this middle-grade novel is about a boy's immigration experience, his annoying little brother, and their cake-baking hijinks!

My Thoughts
Remy Lai has done a wonderful job portraying what it can be like for children who relocate and do not speak the language of their new country. Jingwen is confused, embarrassed, frustrated and angry. It doesn't help that his little brother seems to be making friends and learning English far more easily. Jingwen's desperation is palpable as he feverishly tries to finish making all the cakes he and his father had talked about making for the Pie in the Sky cake shop, hoping that he will feel better by honoring his father.
Although the book is 385 pages, parts of it are presented using a graphic novel format which help move the story forward. Australian people are drawn looking like aliens and their speech bubbles are nonsense symbols representing how Jingwen sees them.
This book offers many discussion possibilities for students. It can serve as a mirror for students who are English Language Learners and a window for native students to see what new students may be experiencing as they acclimate to a new country.
I would recommend it for grades 4-6.
I would also not recommend that you read Pie in the Sky on an empty stomach. Those cakes just sound so yummy! 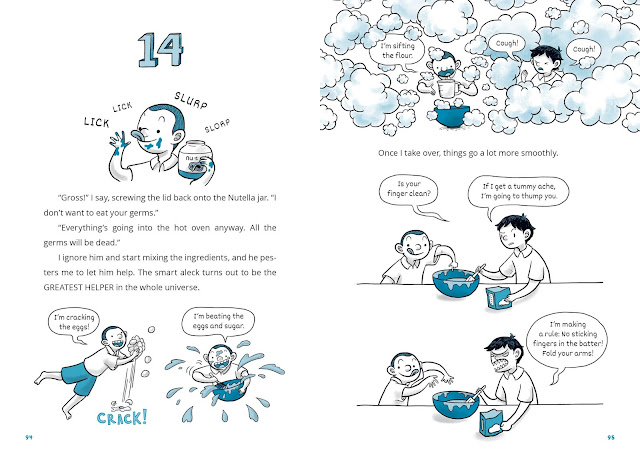 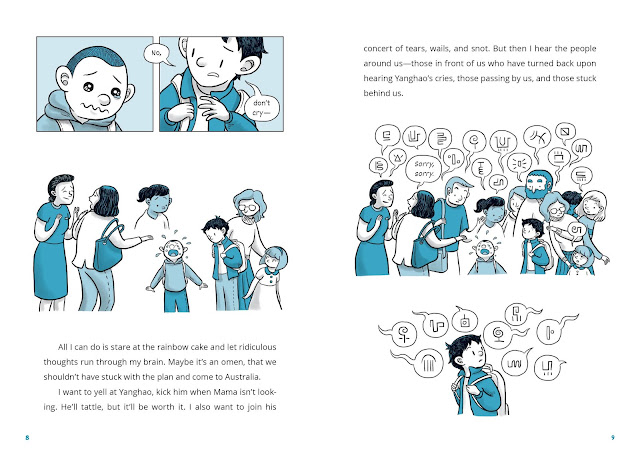 See What Others Have to Say About Pie in the Sky:
Fuse 8 from School Library Journal
Kirkus
Publishers Weekly

Visit Remy Lai's website
Posted by Gigi McAllister at 3:31 AM