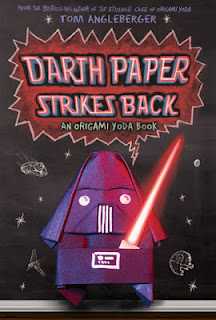 
Summary
This book is a case file to save Dwight/Origami Yoda. I’ll tell you why later.
It all started in the library at the beginning of the school year when Harvey had just introduced Darth Paper. Darth Paper is very evil and is trying to prove that Origami Yoda is a fraud. Harvey is trying to prove that Origami Yoda is a fraud too- FYI he is an evil guy.
Dwight might get suspended from McQuarrie Middle School because he got in a fight in book one and got the blame for it. He also goes to in-school suspension a lot. If he gets suspended again, he might be sent to a school called CREF (the Correctional and Remedial Education Facility) for the rest of the school year. CREF is for kids who need special help with behavior.

Now Tommy, who narrates the story, is going around the school and asking everybody how Dwight and Origami Yoda helped them. Most of the chapters make a lot of sense, but some of them are confusing.  It's confusing because they skip around really fast. I needed to reread some parts over because they didn’t make much sense at first.
The chapters usually start out as “Dear School Board”.  A lot of different people talk about their problem, and how Origami Yoda saved the day(or week, or month).
After that is the ending. I won’t tell you about that because then you wouldn’t read the book.
One theme of Darth Paper Strikes Back is good vs evil.  Origami Yoda, Tommy, Kellen, Dwight's other friends, Darth Paper and Harvey have been fighting all year because Harvey is trying to prove that Origami Yoda is a fraud. Another theme is teamwork. Tommy and other kids are using teamwork to prove that Dwight is a good kid.

My Opinion
My opinion is that I think this book is one of the best books I’ve read. This book is for ages 8 and up. I think if you’re interested in sarcastic, interesting, and crazy books. This should be at the top of the list.

Here is a book trailer
Posted by Gigi McAllister at 1:04 PM 2 comments:

A Student Review of Jeremy Bender vs the Cupcake Cadets