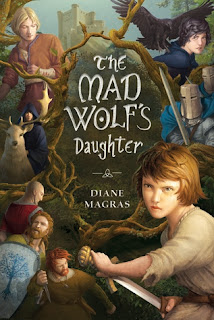 Goodreads Summary
A Scottish medieval adventure about the youngest in a war-band who must free her family from a castle prison after knights attack her home.
One dark night, Drest’s sheltered life on a remote Scottish headland is shattered when invading knights capture her family, but leave Drest behind. Her father, the Mad Wolf of the North, and her beloved brothers are a fearsome war-band, but now Drest is the only one who can save them. So she starts off on a wild rescue attempt, taking a wounded invader along as a hostage.

Hunted by a bandit with a dark link to her family’s past, aided by a witch whom she rescues from the stake, Drest travels through unwelcoming villages, desolate forests, and haunted towns. Every time she faces a challenge, her five brothers speak to her in her mind about courage and her role in the war-band. But on her journey, Drest learns that the war-band is legendary for terrorizing the land. If she frees them, they’ll not hesitate to hurt the gentle knight who’s become her friend.
Drest thought that all she wanted was her family back; now she has to wonder what their freedom would really mean. Is she her father’s daughter or is it time to become her own legend?

My Thoughts
I have to admit that I don't read a lot of medieval fiction, but I enjoyed this book very much.  Drest is a fantastic, multi-dimensional character. She is brave, clever, strong and, in spite of herself, compassionate.  She is quite creative with her Scottish insults. Some of my favorites included, "rot-headed prickle fish" and "toad-faced boar's bladder".  Drest is faced with moral challenges along her quest. She needs to get the knight, her enemy, safely to the castle. This means that she must tend to his wounds and help him to walk throughout the long journey. It is hard to harbor ill-will for someone you are caring for and Drest begins to see her enemy in a different light. She also learns things about her father and brothers who are hated and feared far and wide for the terrible things they have done. Surely the father who loves her and the brothers that protect her could not intentionally hurt people.
Magras does not shy away from the language of the age.  Thankfully there is a glossary for readers can look up some of the terms. She also provides more information on medieval life in the author's note and there is a map in the front of the book so readers can follow the journey.
I would highly recommend The Mad Wolf's Daughter for grades 5-8. This is Diane Magras' debut novel and I certainly hope we get more gems from her in the near future.

Check out the official book trailer.

See what others have to say about this book:
School Library Journal
Publishers Weekly
Kirkus

One Minute Books
Posted by Gigi McAllister at 12:00 AM