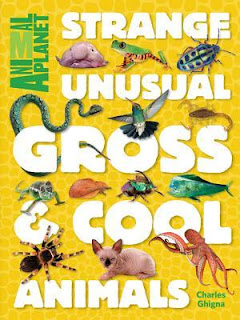 Did you know that an archerfish can spit water up to 16 feet? Or that the giant weta is the world's largest and heaviest insect? Animal Planet's fascinating exploration of animal oddities introduces young animal lovers to some of the most astonishing, gorgeous, and obscure animals in the world-including some brand new discoveries! Packed with more than 200 vibrant photographs and fun facts about animals with unusual behaviors, strange appearances, and remarkable stats, this deluxe gift book is perfect for reluctant readers or anyone who loves totally gross and amazing animals.
A portion of the proceeds from the sale of books in the Animal Bites series benefits the principal partners of R.O.A.R. (Reach Out. Act. Respond.), Animal Planet's initiative dedicated to improving the lives of animals in our communities and in the wild.

My Thoughts
Strange, unusual, gross and cool all seem fitting words to describe the animals in this book. I learned about so many animals I never knew existed before including the markhor, maleo, rhombic egg eater and the kakapo.
The book presents animals in large sections, Strange Animals, Unusual Animals, Gross Animals, and Cool Animals. It includes a glossary and interesting sections that focus more closely on body parts such as "The Eyes Have It" and "Fabulous Feet".

The pages are big and covered with gorgeous photographs from Animal Planet. 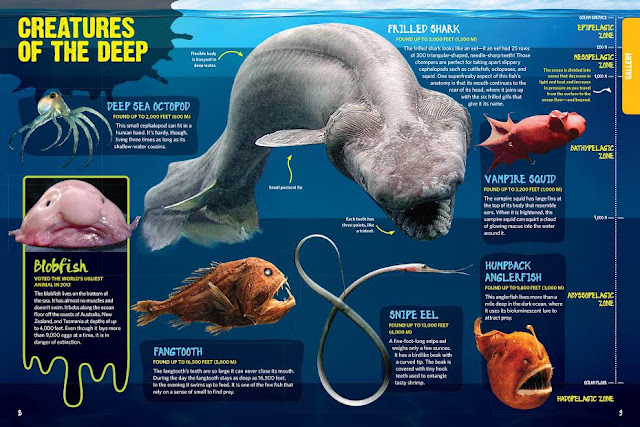 Strange, Unusual, Gross and Cool Animals would make a wonderful addition to a school or classroom library and a great gift for young animal enthusiasts.

See what others have to say about this book:
Kid Lit Reviews
San Francisco Book Review
Purple Owl Reviews

I am excited that Charles Ghigna agreed to do a guest post today. Below he describes how this book was "born".

From a Treehouse in the Middle of Alabama
by Charles Ghigna

It’s no wonder an author with a name like “Goose” for a pseudonym was asked to write another book about animals. But this is no ordinary book. This is a book full of well-researched animals animals, strange, unusual, gross and cool.

I live in a treehouse in the middle of Alabama where I’ve written more than a hundred books. I like to look out the window and make up poems and stories about fictitious animals who live only in my imagination — and the imaginations of my young readers.

But they wanted a book about real animals! Exotic animals that roam the forests of the world and swim the depths of oceans. This was not going to be a typical book of poems and stories. This was going to be a tome of timeless importance to inspire and intrigue, to captivate and gross out the preteen crowd of cool kids, kids who love to read and explore, and kids who do not like to read and explore but who would be tempted to open a book that has the word “gross” on its cover.

So, I got up out of my cozy treehouse and drove directly to my local library asking for help. There in the wonderfully inspiring confines of the Homewood Public Library I told my librarian friends about my new project. They saw the fear in my eyes. “Help,” I said in the voice of a bug-eyed Blobfish.

In less time than it takes for the Rosy Wolfsnail to capture and devour its prey, my arms were stacked high with books about some of the world’s most exotic animals, animals from the tops of the Amazon mountains to the bottom of the seas off the coasts of Australia.

And so I waddled my way back to the treehouse like a happy Bluefooted Booby where I would spend the next nine months reading, writing, researching, and revising information about some of the world’s coolest animals, many of them newly discovered. I called scientists, teachers, librarians, family and friends, and asked them to suggest animals they thought should be on the list. I researched all the books I could find, as well as websites and blogs. I stayed up late at night and into the wee hours of the morning, catching late afternoon catnaps on the sofa of my treehouse.

Then the real work began. The fun work of taking all the information I had gathered about each animal and crystalizing it into a book that no kid of any age could resist. I used my skills as a poet to “show and not tell.” I pretended I was a kid again, a curious kid discovering a new world of the most amazing collection of animals I had ever seen.

Before long, I had a book full of exotic animals. A strange, unusual, gross and cool book of kid-friendly, kid-scary creatures. I passed my manuscript along to my editors at Time Inc. They magically transformed my text into little attractive packages of words accompanied by some of the world’s most gorgeous eye popping pictures by some of the world’s most renowned photographers.

And so after nine months in the making, our beautiful book baby was born. We call her SUGAC for short. We love our SUGAC and we hope you like her. We hope everyone whoever wanders this planet, whoever wonders this animal planet, will like her too.

Thanks again Charles for sharing your journey to bring Strange, Unusual, Gross & Cool Animals to readers.


Charles Ghigna - Father Goose® lives in a treehouse in the middle of Alabama.
He is the author of more than 5,000 poems and 100 award-winning books from
Random House, Disney-Hyperion, Time Inc., Scholastic, Simon & Schuster,
Capstone, Boyds Mills, Abrams, Orca, Charlesbridge and other publishers.

Visit his website here.
Posted by Gigi McAllister at 4:45 AM