Review of The Terrible Thing That Happened to Barnaby Brocket 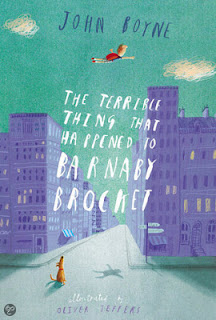 The Terrible Thing that Happened to Barnaby Brocket by John Boyne

Review copy provided by NetGalley.
Poor Barnaby Brocket was born into a family that just wanted to be normal, with normal parents and normal kids. They don't like anything that brought attention to them. Unfortunately, their third child Barnaby was different from most kids. He was born without the ability to keep his feet on the ground. He literally floated into the air unless he was weighted or tethered somehow. In his parent's eyes, this difference was shameful and should be hidden as much as possible.

His horrible parents tell him at every turn how embarrassed they are of him and his insistence on being different. Finally when Barnaby is eight years old, his parents do the unthinkable, they let him go. His awful mother takes him to Sydney, cuts holes in his weighted rucksack and lets him float away.

This leads to many exciting, if not outrageous, adventures for Barnaby. He bumps into a hot air balloon occupied by two elderly women who take him to their coffee farm in Brazil. The farm is home to a host of people who don't fit in with conventional norms. From there he travels to New York, where he befriends a window washer and ends up helping the man become a recognized artist. His travels continue to Canada, Ireland and finally to a space shuttle that eventually lands back in Sydney where he is reunited with his family. His siblings are thrilled, but his neglectful parents are not so welcoming.

I won't spoil the end, but suffice it to say, Barnaby has some decisions to make.

This book has a definite Roald Dahl-like feel with the terrible parents and the child with a special ability. The illustrations even seem to be similar to Quentin Blake's illustrations. It also has many strange and outlandish experiences like Roald Dahl's books, but a few too many actually. While the message of the book is a common and valid one, be yourself and accept others, the outrageousness of it actually gets in the way of completely delivering the message. Barnaby does not stay anywhere long enough for the reader to really get to know any of the characters. In fact Barnaby himself is not a very well developed or believable character. He is supposed to touch the lives of so many in his travels, but the experiences are brief and superficial.

While it was just ok for me, this book has been well-received by many in the UK where is has already been published.  Children who enjoy Roald Dahl books or books with world travels and quirky characters may enjoy this book.

Click here to see other reviews of this book.

Click here to go to the author's web site.